Reenactments and the Realities of Historical Warfare

Do reenactments convey the realities of historical warfare? Well that's a question I tackled over at The Activist History Review this week. I was honored to have been asked by one of the editors to write up an article that discusses how reenactments do or don't show the realities of war, during a time that we honor our veterans--past and present. Since the article is on a topic I would normally address on this blog, I'm sharing the link here. As always, I hope you enjoy reading it and--more importantly--I hope it sparks conversation and contemplation.
While you're there, be sure to also check out some of the other articles!

"Who Are The Good Guys?": The Role of Reenactments in Conveying the Realities of Historical Warfare


Finally, and most importantly, to the veterans reading this article, I thank you for your service. While I can never truly understand or relate to the hardships you may have experienced, please know that your service--the sacrifices both seen and unseen and the lost comrades--will never be forgotten.
Posted by The Modern Reenactor at 6:14 AM 2 comments:

Email ThisBlogThis!Share to TwitterShare to FacebookShare to Pinterest
Labels: Education

If you would not be forgotten...

Following Benjamin Franklin's advice, I thought I'd write something that might be worth the reading. In his Poor Richard's Almanac for May 1738, Franklin wrote one of my favorite phrases from this period: "if you wou’d not be forgotten, As soon as you are dead and rotten, Either write things worth reading, or do things worth the writing."

In a previous article, I addressed how reenactors can better engage the visiting public and make content relevant to their daily lives. After all, we want them to have a good time and to come back. Recently though, I've noticed that the issue isn't so much encouraging visitors to return, but rather it's allowing reenactors to return (just Google "future of reenacting in the US"). I don't mean to claim that reenactors are victims to public scrutiny, rather we need to prove to the public that we are a responsible source of historical information and interpretation. With an increased public enthusiasm for pulling historically-repugnant and presently-irrelevant statues from their pedestals, responsible and accurate public education for our history needs to fill the void. As living historians, we have a unique role in society and relationship with the public that almost compels us to step forward and responsibly teach the history. 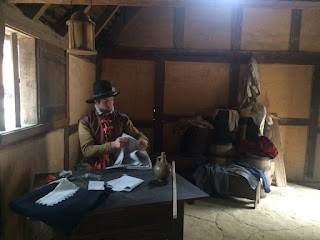 
Before getting into the good stuff, we need to establish some ground rules first. Living historians are interpreters who portray what they learn from various sources. Our goal should be to relate what we learned from our sources to the public through an engaging "snapshot" of past events. As stated in the past, we are teachers whether we agreed to that title or not. If you work at a museum/historical site or just show up to an event dressed up, your appearance alone will present a history lesson to those who look at you. 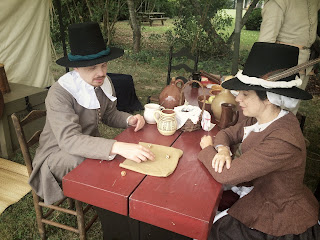 Like any teacher-student relationship, if any learning is going to happen, the students have to trust you. If they can't trust you, they won't believe what you're teaching them, they'll consider it outright invalid, and/or they will contest it. So from the very beginning, you need to be well-informed and you need to be prepared. Too little information or a lack of confidence in your audience will lead you to trivialize or to make gross generalizations that lead to misunderstandings of larger concepts (i.e. the phrase from the Declaration of Independence, "all men are created equal," is a generalization that might lead some to believe that everyone was treated equally, until the historical context is explained). Ultimately, that may even permit members of the public to make inaccurate claims based on misunderstood or misinterpreted historical evidence to further modern issues.

I'm all for connecting the history you're interpreting to modern issues. The Museum of the American Revolution does this beautifully in a number of ways. One example of this is the idea that indigenous peoples, enslaved peoples and their descendants, and immigrants have always contributed in significant ways to our country (both during the Revolution and since then to today). When presenting your history through a relevant modern topic, especially hot-buttons ones (i.e. immigration, sexual preference, race, etc.), know your facts so that you don't fall into the trap of generalizing, and avoid modern biases that would derail your presentation. If you find yourself offering a ton of analysis instead of facts, take a step back and reevaluate your approach. Certainly help visitors to understand why the history is significant--some analysis is required--but at the same time, know the difference between historical significance and propaganda. You can take a horse to water, but you can't make him drink it. Similarly, you can bludgeon visitors with your modern take on historical events; they may listen and agree ("yup, uhuh, I hear ya") but there is also a good chance they'll consider you biased and unreliable. As a teacher, you want everyone to learn and appreciate what you have to say, not just those who'll agree with you.


To contest the assertions that reenacting is a dying hobby and that it's so politically charged now that no one will want to host a reenactment, I instead suggest that reenacting is an excellent way to teach history. Full disclosure: I agree that people who represent hate or oppression in some form don't deserve a prominent and glorified stage for eternity. We place on a pedestal symbols of ideas that we desire to emulate and consider representative of who we are. Instead of fostering ignorant idolatry, we should instead glorify the pursuit of knowledge and lift education up onto the empty platforms once occupied by the "heroes" of an oppressive past.

To remain relevant we need to become an accurate outlet of unbiased un-trivialized information, not a hobby that glorifies outdated and ignorant ideas. Teach history, not propaganda. If we want reenacting to continue, we need to be seen by society as people who are serious about their responsibility to teaching history. One of the biggest problems our society has with certain historical monuments is that they glorify the individual and what they stood for. Removing them is not about erasing the past or disrespecting the men and women who died in the past, but rather a de-glorification of the individuals and the ideologies they were known for supporting. If we are seen as glorifiers of ignorant and inhumane ideas in history, then we will be removed from the same pedestal as those monuments. However, if we can present history from multiple perspectives and place it in its historical context while making meaningful connections, we will have effectively restored confidence in living history. We will have secured our place in society as reliable educators and sources of social, cultural, and political history. 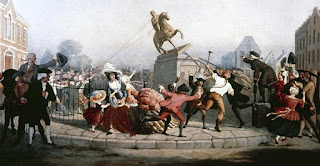 Society could make incredible use of living historians. We are a means for the public to engage with history that books, movies, and statues just can't do. Living historians are in the best position to eliminate ignorance through sharing information and concepts in a way that engages most of the public's senses. We just need to insure that what we teach is supported with evidence, is not reliant on generalizations that serve to trivialize history or to misinform, and is presented in a way that is meaningful and relevant, but at the same time is not propaganda.

What all of this boils down to, for me anyways, is that humans are by nature experiential learners (i.e. by smelling the smoke and witnessing a battle, we are more likely to remember the event being portrayed and relate to it than if we read it in a book). Monuments are static displays that glorify people and the ideas they stood for. They don't move, they can't tell you their history, and they cannot explain why they're there. Living historians offer dynamic displays of information that can do all of these things. If done responsibly, living history will have an important and entertaining role in the future. Let's just all agree to not stand on the empty stone platforms where archaic principles and hateful ideas once stood in their glorified adamant, but to actively interact with and educate our future by standing on the firm ground among them.

Thanks for reading!
Posted by The Modern Reenactor at 4:09 PM 7 comments: